Burning Man Ultramarathon 2013: Fourth Annual Ultra, Four Times As Awesome As I Could Have Imagined

The Burning Man Ultramarathon started as a dream of mine and has turned into a passion. It combines my love of ultrarunning with the amazing culture of Burning Man and is truly a race like no other. Where else can you take shots of whiskey, jump on trampolines, dance next to and inside of amazing sculptures, visit huge raves and clubs, see a beautiful mountain sunrise, listen to the boom-boom-boom of state-of-the-art sound systems blasting music from a giant bus transformed into a sailboat or playground or fuzzy caterpillar with people dancing on it and hanging off it...while running an ultramarathon?
Yeah, it's the only place in the world this can happen. And that's why I love it - and the runners do.
Many ultrarunners fulfill their lifelong dream of attending Burning Man - and many "burners" fulfill their lifelong dreams of running an ultramarathon. The community is based on comradery, on the ten principles of Burning Man.  People make the race what it is - each runner contributes a gallon of water and a snack to share (and some of the snacks were phenomenal, considering people were only camping and most without access to electricity), and other runners contributed custom-made water bottles, decorated tiles, laser-burned necklaces, and hugs. The camp Pink Lightning served as Start, Finish and the Main Aid Station, but also was the official party. People came by, sharing water gun squirts and hugs and shots and cheers as music blared and runners circulated throughout the aid station.
First place male Shaun "I usually don't race" Maguire won by nearly 40 minutes with a time of 3:32:51. First place woman Kathy D'Onfrio won with a time of 4:23:42 - and the course went close by Kathy's art installation "A Vortex for Vultures," and everyone was able to get a good view of the beauty of the birds of paradise and vultures as they ran by. While dodging cigarettes offered and loud dub step, runners have an amazing time like at no other race. While a ticket to Burning Man is required, the spirit of Burning Man will carry you when your steps tire - to the beat of whatever music you happen to be passing at that moment.
To see a truly wonderful video that captures the flavor of the race, check out second-place male Ryan Van Duzer's video.

My race was a little crap - my stomach went south after busting out 8-8:30 minute miles for the first 10 miles - and then I spent quite an enormous amount of time in the port-a-potties. Luckily, the port-a-potties were stationed close to big sound camps, so I was able to have a soundtrack to my misery. Ah well. I would literally lose everyone I was running with, as bathroom stops were usually between 5-10 minutes. Argh. When I came into the aid station, I yelled to Wayne (aka timekeeper extraordinaire and super boyfriend) to get my medical bag in the tent - and he came out with some Immodium for me. Booo. But I still had fun? How could I not? My last lap, I dragged out my injured Wayne for the out-and-back. He watched as I dodged people, ran into Bubbles and Bass and begged for a champagne (which, upon hearing how much I ran, they quickly gave to me), blew kisses, hugged every runner I passed - and had a blast. How could I not? It's Burning Man, my favourite place on the planet. 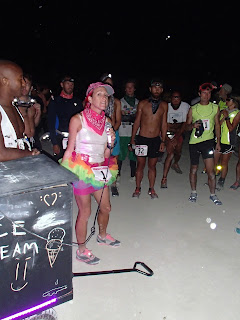 Post race, my tummy took a while to calm down. I cheered on the runners, hung out, drank electrolyte drinks, danced, clutched my tummy, hugged everyone who finished. It was a party for all! My awesome campmates Yosvany and Effy made the party even livelier, spraying down runners w vinegar and water, serving drinks, dancing....oh how I love Burning Man.

Hope to see you next year.

Duzer made this awesome video....Thanks, Duzer.

Posted by cherie at 3:29 PM No comments:

Each year, I have more fun in a different way. The art, the dancing, the friendships (new & old), the community, the culture, the spectacle. The ultra I'll touch upon later, but oh, what a week. My favourite week of the year. 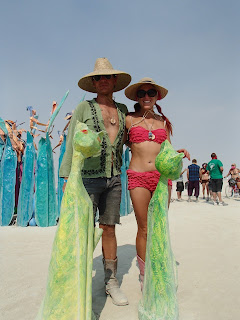 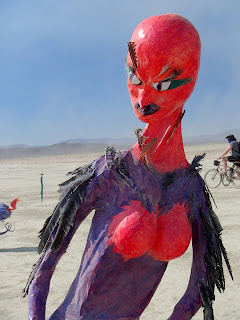 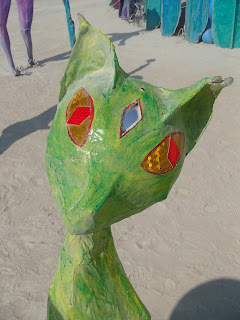 Posted by cherie at 3:27 PM No comments:

Ray and I were looking for a fast marathon to run, and we picked Chasing the Unicorns. It was a flat, pretty course, along a towpath, with soft gravely footing (but not too gravely, so nice for running), nice views, friendly people.

Unfortunately, there was too much going on for me - some stuff at home, prep for Burning Man (complete insanity - I left two days after getting home from the race), dealing with the after-effects of a concussion (headaches every day, difficulty concentrating, vertigo, dizziness, reduced training), prep for the Burning Man Ultramarathon, work was nuts...so it was really bad timing. My mind was all over the place, and sadly, my running was too.

I started out hard, sticking to 7:20-7:30 pace. I chatted, enjoyed the course. I rotated between 1st and 2nd place throughout the first 18  miles. Then my legs went dead and I slowed down. I felt pretty sad, but then finished. Upon finishing, my throbbing head and cramps in my uterus, coupled with a slower-than-desired time, left me sad. Oh well. Every race can't be THE RACE.
Posted by cherie at 1:59 PM No comments: