I always love the idea that your birthday should be your perfect day. Too bad that was not my day this year, but it was still a lot of fun.
I woke up at 4a.m. and quickly got dressed and ate. Wayne insisted upon giving me a present before I left, and I kissed him goodbye as I headed out on a run.
I decided to organize a 50k around Manhattan. I had done various sections of doing long runs, even as long as 26 miles last year. I posted it on FB in a few groups that I’m a part of, and on a Meet-up Group for Trail Running and Ultrarunning in New York. I thought it would be a fun way to celebrate my birthday.
The forecast called for rain, lots of it, and we were not denied. Mary and I ran over the Pulaski in our tutus and took the 7 to 42nd Street, where we met a bunch of people under scaffolding. I dreaded the rain, and hoped it wouldn’t make things too miserable. Some were good friends, some were running friends, and some were new friends. We all had a lot of fun.
The plan was to run around Manhattan south, going clockwise around Manhattan. We’d OF COURSE stop at Twin Donut as tradition demands (NYC Ultrarunners always stop at Twin Donut.) and wait for each other and try to keep together as much as we could the entire time.
I was really excited to see Menachem at the start, who was training for his first ultra (Really, his first race!) of the Burning Man 50k. Everyone chatted and worried about the weather, and we left at 10 after five.
The idea was to run around a 10 minute pace, but we mostly ran faster. We stopped every few miles – so people could get water, so people could go to the bathroom. Beth joined us by the Staten Island ferry and gave me a very decorated Hammer Gel. Fun.
Sometime between 14th Street and 50th Street, my phone, despite being in a Ziploc bag, got wet and died. This turned out to be the source of my hell – I lost all my photos, including a bunch of photos for a series of articles I had planned on writing. It was stressful and I lost 12 birthday text messages (So whoever you are, whatever you wrote, THANK YOU!) and ended up spending an hour and a half at the Verizon Store in Greenpoint, where they were nice enough to help  me and give me a loaner phone.
Steven met up with us in the late 30s/early 40s, and had way more energy than us. Everyone took turns running with others, chatting, catching up. It was really fun.
We made the course a little wrong turn and ran some extra miles, but I just did what Wayne likes to say, “When you see a fork in the road, take it.” (He’s more thinking of food, hahah.)
We stopped to use the bathroom and a parks worker was cleaning the women’s bathroom. We used the filthy men’s bathroom, where a pair of discarded underwear served as the butt of our jokes. It was a relief to use the bathroom because we were all completely soaked and there’s just something difficult about running in completely soaking wet clothes when you have to pee. We joked with the parks worker, and when she found out it was my birthday, she sang “Happy Birthday” to me and make me plié and dance. I couldn’t stop laughing.
When running alongside the West Side Highway at one point, we saw cars hitting a giant puddle, causing a tsunami that covered the entire path. There was a deep puddle covering our path, and we were forced to walk on a high curb next to the puddle on the highway, so cars splashed us as we found ourselves stepping in the giant gross puddle. We screamed and laughed and it sounds awful, but it really wasn’t as bad as one would think.
We headed north and ran through Inwood Park. That part was a little bit tricky, but Rich led us the right way. The park was nice, and a little tricky to navigate. We exited the park on 218th Street, and everyone cheered at Twin Donut.

I don’t even like donuts – well, I like them, but they usually make me feel ill after. I got a coconut donut and ate half and it was delicious. Others ate eggs and homefries and toast, and we hung out there a bit too long as we grew cold and dripped large puddles underneath our seats. I fiddled with my phone and fretted over it.
When we all left, we were shivering and it took us a while to warm up. We entered Harlem River Drive Park, and it was just so nice to be running together.  Then we were on the streets for a long time, which was pretty fun. We stopped so Rich could get a “Tropical Fantasy” drink (I would not call it juice – drink is more like it.) and stretched and laughed. We posed in front of the “Crack is Wack” mural and saw another side of the mural you normally can’t see from the highway. 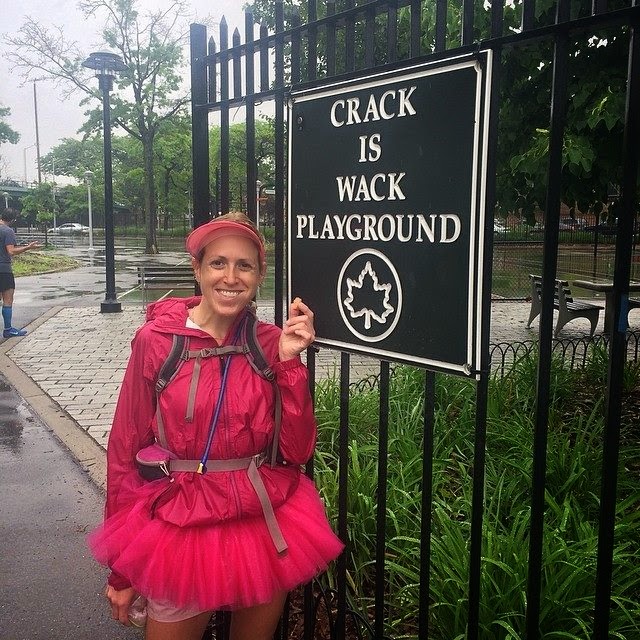 As the street numbers grew smaller and smaller, we got excited. We finished on 42nd and 1st, cheering in front of the UN! 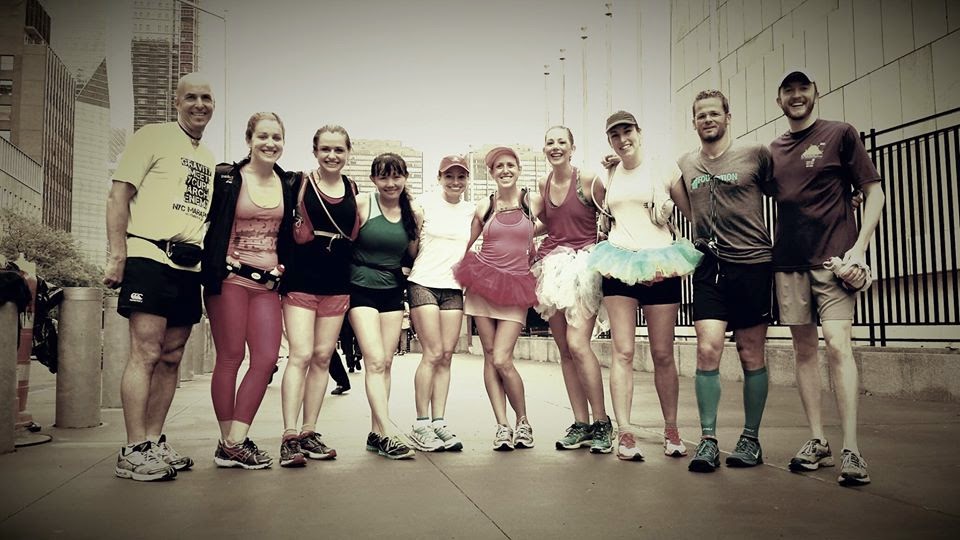 It was great to see clean Tommy Pyon and have Skype join us; I had fun running with Chris Solarz and Emi and Mary and Beth and Menachem and Kim and Steve and Rich and Mike and Miguel and it was totally awesome, a wonderful birthday present.
The rest of the birthday was a little different. I ate, did laundry, showered, fixed my cakes, went out to dinner with my family and Wayne, and then drank champagne and ate lots of cake with my friends.
Thank you, all. As much as I hate the ageing process (Funny how you couldn’t wait to be older when you were much younger.), I had a beautiful day. 35 does feel different, and I guess I need to focus more on enjoying each and every day instead of thinking of what I could have done. I need to just do it!

We plan on running around 10 minute miles, so at any point, try to calculate the mileage and time. See a map here with all of the mile markers: http://www.gmap-pedometer.com/?r=6324851
Posted by cherie at 8:08 PM No comments:

When I first heard about the Elliot Rodgers shooting in San Diego, I couldn’t help but think, “No. No. No. Not another one.”
While many were fixated on his clear mental illness, it’s obvious that misogyny dominates much of the reason for why he did what he did.
I don’t think a lot of men realize what women have to go through every day. How sexual harassment can turn into violence. My body is not here for you. I am not for other’s purposes. If I don’t like you, it doesn’t necessarily mean there is something wrong with me, or maybe even with you. It’s just taste. Or your tact. If a woman rejects you, that’s not reason to call her names, threaten her with violence.

Buffalo Half Marathon: I'm BACK!

I was pretty nervous at the Buffalo Half.

Initially, I was planning on running the Buffalo Marathon, racing it and hopefully doing really well. With the awful shin pain I felt during the Brooklyn Half, I was nervous about pushing it. After talking with my PT and my coach, I decided to drop down to the half.

The course itself was really nice - a lot of pretty streets, you get to run along the water, nice cheering crowds. I was pretty excited to be in Buffalo, seeing two of my best friends, and it was nice to be running and having V cheer for me along the course.

The finish was quick and much less of a sh*tshow than other marathons I have done (aka I loved it!) although the "fruit" they promised was less like the honeydew V and I had hoped for and more of the old orange slices and chunks of banana.

I ran a somewhat steady pace, struggling towards the end, mainly because I hadn't done speed in so freaking long.

Brooklyn Half: No Cheesecake Please

I love the Brooklyn Half.

So even though my doctor hadn't approved me running, I'm a moron and decided to run it anyway. I was pretty excited and it felt amazing to be running.

I started off with a bunch of my friends in one of the early corrals. I ended up running by James (BRC50k alum) and Kike (another BRC50k alum!) and chatted with them. I was supposed to start at, per Ray's instructions, at 9 min miles, and I felt good,  could drop to 8s. I started at 7s. Ooops.

And then the crash came, around mile 8. I was running with some NBR peeps - Mia and Jose - and all felt horrendous. Then Mia and I stopped to go to the bathroom - my tummy was not right - and when I left the port-a-potty, my stomach felt worse and my shin was really bothering me. Mile 9 now.

I told Mia to go ahead and slowed down a lot. I walked, because I knew I could only damage myself more. My stomach was a wreck. I ran, I walked. Wayne biked next to me.

Really, Italian ricotta cheesecake the night before a half is NOT a good idea.

Finished around 1:55 or so. Shin hurt a lot and could barely walk after. Didn't eat until late afternoon as my stomach was killing me all day.