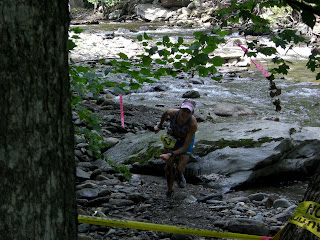 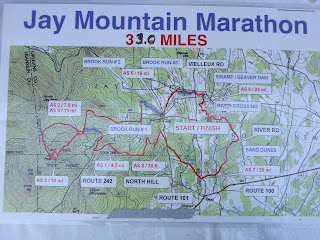 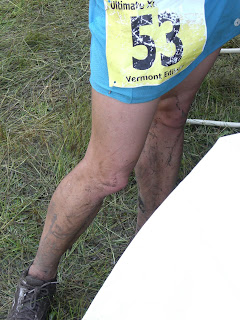 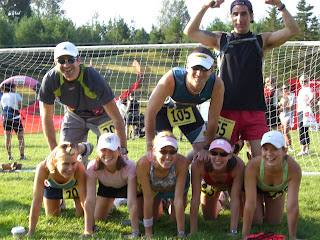 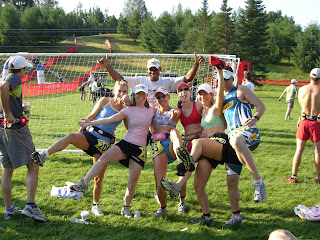 I did this race in 2007. You’d think I would remember. No, I didn't. I didn't remember how hard, how utterly painful, how insane this race is -- yet I finished with a smile.

Crista, Brenda, Mike, Michael, Rich, Mark, Cara, , and I all have been training for this race with long trail runs almost every weekend. Shawn and Jeff were supposed to run but pulled out due to injury; Dennis had his thesis to focus on. We rented a large mansion to spend the weekend in running heaven/hell.

Saturday morning we woke up at six to focus on fueling, hydrating, and eliminating. The house was an insane buzz of, "I took care of business!" "Does anyone have any sunscreen?" "I can't find my lube."

We drove to the start, and somehow, Cara (who was taking care of business) got left behind at the house. When I realized she was not there, Trevor sprinted to his car, sped down the road until he saw Cara who was jogging/walking. “I was sticking my thumb out,” she later told me.

The start was slightly chaotic, as all races are. Running to the bathroom, last-minute gels, water, stretching. And we lined up…and we were off!
Knowing how everything is so narrow, I went out hard. Shortly after the start, there are lots of single-track trails, where it’s difficult to pass people. I had fun on the hills, pulling myself up on the rope, falling in the first few miles facedown – but pulling myself up, laughing. In the beginning, people who don’t know any better try to avoid the mud. I plowed through, knowing it would only get worse.

Early on, there was a good deal of brook running. Luckily, the brook was shallower than I remember it to be last year, and I knew how to run. I focused, looked straight ahead, and stumbled through the brook. I lost a lot of time, as usual, but tackled it in a better fashion this year.

We had to pull ourselves up into two culverts. The first was rather long, the water rushed through it and it was totally creepy. When I climbed out, I caught up with a guy ahead of me. “What a mindfuck,” we mused. The second one was really high up and it was hard to pull yourself up into it. This guy behind me said, “Want me to help you up?” but I wanted to try. I succeeded.

At aid station two, I changed my socks (dry socks felt great!), ate some food, and Trevor refilled my water bottles. I kissed him goodbye, and ran to the ski mountain that my boyfriend skied down last winter. When I got to the steep incline, I began walking with a guy who worked for Smucker’s. We joined two Jay vets and talked about how much tougher it seemed this year. It was incredibly steep and we grew out of breath just walking this hill. Towards the top, there were all these rocks we had to climb on, and I ended up having to pull myself down the last part. The aid station at the top had oatmeal cookies, and I refilled my water bottles before my descent. I ran at a good pace until I heard someone screaming and apparently I missed the turnoff. I’m good like that. I ran the 100-150 meters back and went down the steep mountain.

When we got to the bottom, we entered woods, with some crazy, windy trails and lots of mud. Good times. I fell in the mud, and was covered with mud. Pretty revolting. As I ate my sports jelly beans, I was covering them with dirt first. Mmmm.

We ran back in the brook, and again, I focused at my own pace. We went in and out of the brook multiple times during this race. When the rocks are small, it’s easier to run. When they’re big and flat, I would take my time. Sometimes I would stop, not sure where to step next, and when I lost my momentum, it made it harder to keep going. One guy told me, “Just pretend you’re a kid again,” and I tried to, but ran my race. I didn’t run faster than I felt comfortable in the brook.

I ran on various trails, meeting all sorts of different people – talked with a guy who spent some years in LI about the beach, recognized someone else I ran with last year, met other amazing people. At mile 19, I made the cut-off but by less time than I did last year. The race was tougher than I remembered. Trevor was at nineteen. “Don’t let me do this race again,” I ordered him. “Don’t!”

He laughed. “You said the same exact thing last year at this aid station!”

Hmmm. I stuffed another salted potato in my mouth, and sucked down some Gatorade. I gave him a kiss and ran off. There was a steep incline into a meadowy part, exposed to the sun. I remembered a chat I had last year during this part with a runner who told me he arranged his family vacations around his ultras; his family was shopping in Montreal while he did his ultra.

(I may be getting this slightly out of order; I apologize but my memories are foggy.)

Last year, the swamp had high grass and some mucky ground, but nothing I remember as too horrendous. This year, the grass was high (2-3 meters high, or more) and the ground was…well, it was somewhere below water. You were walking through mucky mud, water up to your waist, sometimes even chest, pulling yourself up onto chunks of grass, running, walking in mud. Somehow I ended up passing people here; some people were really freaked out and hated it, but it was easier than the brook (no rocks). I just tried not to think about water snakes. People did see leeches, but luckily, I did not.

After I got out of the stream, I may have run more in the brook. We ended up getting to the river, which last year I swam across. This year, I was beat and pulled myself across with the rope. I stumbled out, told the guys, “I’ve never been so happy to see you.” I ran ½ mile to an aid station, meeting a lovely French Canadian woman, Mary. At the aid station, my boyfriend was there, again to fill my water bottles. I inhaled two cups of organic blueberries from the organic blueberry farm whose property we were on, changed my shoes and socks (I had at least ½ cup of dirt in each shoe), ate some pretzels, oranges, drank some Gatorade, kissed Trevor, and left.

Of course more uphills, and I slowly pulled myself up the hills. The energy was sagging in those around me. We were tired. I was glad there was no more brook running…but there was definitely more mud…lots of it.

It’s funny – the last 9 miles (from mile 24 to the end, 33) are probably the easiest. True, there’s a HUGE sand dune, lots of hills, uneven footing, bushwhacking, and there was a ridiculous amount of mud, but no brook running or mountain climbing. I ended up meeting this really rad runner from VT who highly recommended the VT 50 miler (which I’m doing next) and ran with Mary. We were all running together, and people told us about cut-off points and we were worried about friends. Suddenly, we saw the lake. “We’re almost there!” Mary took off but then yelled back at me, “We’re finishing this together!”

We finished strong, in just over 8 hours 40 minutes. I felt a little depressed at it being slower than last year, but you can’t compare, and I was happy to have finished. I was mostly sad that some of my friends didn’t make the cut-off point.

Still, it was a fun race – I had a blast. Sure it was hard, and yes, I did tell Trevor I wouldn’t run it next year…but I have this feeling like I probably will!

i ran the jay ultimate xc this weekend...it was a lot of fun and i'll post the full race report later. some of the negative things about it first:

those are my main complaints. i'll write a full report soon. t is ready to throw a broom at me, so tonight i must focus on cleaning. but sometime this week, i'll give you the full story, plus photos!

Just a reminder -- the Olympics start on August 8. I know I'm excited, especially about the marathons. Can't wait to watch them!
Posted by cherie at 3:52 PM No comments:

Email ThisBlogThis!Share to TwitterShare to FacebookShare to Pinterest
Labels: marathoning

i finished jay. hard. tired. rejoicing and relaxing with a lovely glass of riesling. will update more soon.

things to bring to burning man

i prepped so much but i still hope i'm ready for the challenge: the jay challenge ultimate xc!
Posted by cherie at 9:07 PM 1 comment:

i'm creating this entry, making it specific to the jay ultramarathon. i've used drop bags twice, both for ultimate xc races (so i was covered in mud, water, and absolutely filthy), but here are some suggested items to include in a drop bag. this may or may not be applicable to all races.

so brenda, others, here you go!

if you think it's hot today...

remember that today, the 31st running of the badwater ultramarathon is being held. this may be the toughest race on the earth. i'd love to do it, but don't know if i'm tough enough. i'd need several years of training for it.

good luck, runners! i'm thinking of you today!
Posted by cherie at 9:57 AM 1 comment:

how to live your life

Do not wish to be anything but what you are, and try to be that perfectly.

pictures from the ultimate xc quebec 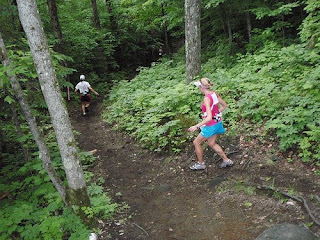 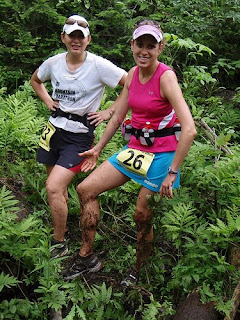 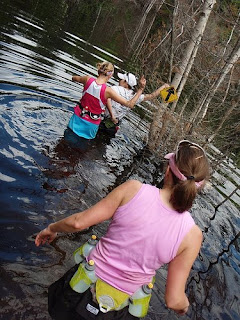 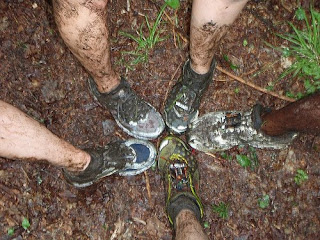 you know you're hungry on a long run when...

someone says, "if we ripped open our empty gel packets, i bet there's a lot of gu in there that we could lick out" and you think that sounds like a good idea.
Posted by cherie at 6:02 PM 1 comment: