Dances with Dirt Green Swamp 50 Miler - 3rd time around is 3x as hot!

On the highway. GPS instructions. Time ticking by too slowly. Slow down as I drive through booth. Take ticket. Where should I put that I won't lose it? In my bra. Drive. Faster. Sweating. Hot sun through windows. I'm getting a tan. AC is up. Not helping. Sweating. Seats soaked. Flip through radio. Nothing good.

Lean back. Lean forward. Pass that stupid car. They're tailgating me. Faster. Slower. Shit. A cop. Car won't read this CD. Why won't any radio stations playing "Rolling in the Deep" down here? Why isn't anyone calling me? Uncomfortable. Shift in seat.

See a Publix, swing car in, realizing I need coconut water. Buy it. Nothing else looks appetizing. Food poisoning after effects linger on. Back in car. Why is there traffic? Flip through radio. Nothing good.

Get to a booth. Exact change only. But - but - there's no cash booth? Ask car behind me; the truck behind them helps. Somehow, car trunk open. Slam it closed, throw quarters in, drive like hell.

Faster. Oh my god, how do people do this every day?

Drive. Flip through radio. Nothing good. Are we there yet?

Food. Off the highway, so it's not bad. Otherwise, it would be deep fried and meat. And that's not my style. Sip more water. Stay hydrated for tomorrow's 50 miler.

Drive. Drive. This town is frightening. Gas station - which side is the tank on? Pump six gallons into the car. And then park by hotel - really, this is what I booked on kayak.com?

And shower. Play music on computer. In bed. It's better than driving. Anything else.
Posted by cherie at 8:20 PM No comments:

Email ThisBlogThis!Share to TwitterShare to FacebookShare to Pinterest
Labels: traveling 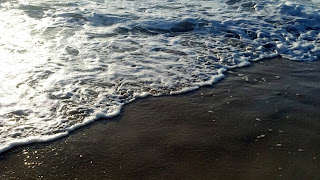 
Get up early, pull on running clothes (of course), towel, water, keys, and head to the car. Drive with windows open, music on, smile on my face.

And onto the sand. Run at whatever pace I want. Sprint when there are seagulls. Slow down when the sand gets tricky. Find the flattest, hardest part of the sand. Love the squish of feet between the feet.


Know tomorrow will be tough, fifty miles of fun. But today is fun.


And after, straight into the water with running clothes on, letting the waves cleanse and excite me. 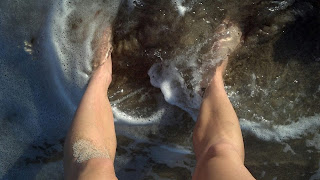 It's my third year in a row running the Dances with Dirt Green Swamp 50 Miler down in Florida, and while I wouldn't say it's the most spectacular race, I do like it. The folks are nice that organize it, it's small and not too crazy, the course isn't too insane, it's a great training run for longer ultras, plus, it's close to Gram.


I'm not in my best shape ever - I know this. A trip to Peru filled with tummy troubles and high altitude asthma problems, followed by more asthma problems, led me to finally regain my strength - only to be slammed with a case of food poisoning on Sunday. (Oh, Whole Foods salad bar, how could you fail me?) earlier this week - leading my body to become completely sick. Today is the first day since Sunday that I feel hungry - I just have felt too ill and too weak to want to eat.


But beach running today and yesterday have filled me with love and energy for the long run - though the runs were short, they were short in recovery from illness, and in preparation for Saturday's race.


Yes, it involved a flight, a long drive (4 hours each way from Gram's), plus hotel's, an annoying drive, did I mention a long drive? But it's fun. It'll be a beautiful day running my favourite distance - and what better way to spend a day than running?


Well, yes, sleeping in late with one's love and brunch and all that is also a wonderful way to spend a day...and yes, the beach...but this comes in just with those!
Posted by cherie at 12:01 PM No comments:

airport madness—hordes of humans rushing and stumbling around luggage-crammed corridors, announcements blaring arrivals, departures, delays—i sit. i eat a muffin in the midst of chaos, crumbs falling in my lap, on the floor. people passing step on my muffin crumbs, carrying bits of my muffin in the grooves of their shoes across the country. perhaps my muffin bits are becoming transcontinental muffin bits. ringing cell phones destroy one’s perception of isolation in foreign areas. people grasp at reality, wondering, what time zone is this? amplified voices rock people out of oblivion and i rise too, rise for my flight, papers falling out of my purse. tickets collected, i.d.s checked, i am selected, randomly, to be searched. (they search everyone’s secrets.) carry-ons spill bras, lipsticks, toothbrushes, batteries, papers, the essentials of humans. shoes removed, pockets emptied, metal detectors bleeping, this complicates the simplified. if a plane were to simply burn up, crash, explode, dismantle itself—in air or sea or land—with deaths, what can we really care about any of this? simplicity eliminates these actions from mattering.
Posted by cherie at 9:22 PM 2 comments:

Email ThisBlogThis!Share to TwitterShare to FacebookShare to Pinterest
Labels: writing

Long Run along the Thames

Yesterday, I aimed to run at least 24 miles.


Unfortunately, not for the first time, the weather ruined my run.


I've heard the expression, "There's no such thing as bad weather, there's only bad clothing." Whoever said that wasn't running in yesterday's condition.


I met up with ultra lister Paul Houston and we took the train to Oxford. We ran to the start of the Thames 100 Miler and watched the runners come in. Wow. They looked dead. Do I look that wretched after running 100 miles? Probably.


Then we ran along the path for nine miles or so - seeing various runners, cheering them on. They were startled at me, because they felt like crap having run over 90 miles and then there's this LOUD boisterous American girl. But they mostly seemed happy.

It was pouring rain during this time, but it was bearable. The trail was ridiculously muddy (poor Centurions!), and I kept slipping.


Then we took a side path and began running towards Oxford in a roundabout way. It sounded like it would be pretty, small villages and such.

But then it began snowing.


And some icy sleet blowing in our faces.


I was soaked. I couldn't feel my feet, which is problematic after my frostbite last year. My gloves were soaked, I could barely carry my water bottle my hands were so cold. Finally, Paul said to me, "If we want to turn around..."


I have never been so cold. I was also feeling jetlagged, which has never happened. I felt spacey and dizzy and sick and terrible.

Running back, we ended up in a small town where we warmed up with hot cocoa. Paul bought us gloves and socks, which helped. It took me a while to feel normal (I felt like I was going to pass out for a while.) and get warm.


We hopped on the train back to London, chatting about upcoming races (Paul's training for a 95miler in Scotland), and ignoring the odd looks on our muddy attire.


A hot shower never felt so lovely!
Posted by cherie at 4:13 AM No comments:

Once again, I'd like to say, I set out to run 50 kilometers - not more. But of course I got lost and of course I ran more.


I tend to get lost in those sorts of races, but flour trail markings made it even easier this time.


Last year, when I ran this race, it was ridiculously cold, the course was covered with snow, ice, and worst of all, freezing cold puddles of water. I ended up with frostbite. Although since it was the race I did the day before my boyfriend and I got together, I somehow think of it fondly.

I've also run it as the South Mountain 100k (my first 100k ever) and the Mayapple 50k (recovery race after surgery). I loved it those times, so this time, sans snow, I figured it would be a fantastic race.


I did have fun...but it wasn't as fun as other times! Instead of the two loops we previously did, we stuck to one loop that was different than it had been other years - so it really wasn't the same course, just a different race in the same place.


The course is full of some ups and downs, a few technical sections, but nothing too crazy. Mostly, you had to keep your eyes on the ground because the course was marked with flour - which made getting lost very easy. (Nearly everyone I spoke to even got lost - two of them on their third loop (They ran separately from each other.), probably because the flour was really hard to see, especially after so many feet had run over it, and the rain the night before. I'm really not a fan of flour used to mark courses. I know ribbons require more time and more effort before and after - but they make it MUCH easier to see and MUCH harder to get lost.


I started out the first loop running, and ended up seeing Megan, who I hadn't seen since I ran Boston in 2009 or 2010. We had shared a room with our mutual friend. We ended up catching up, chatting. We ran into Ray and everyone was very chatty.


At the aid station, Megan and Ray were taking a little longer, so I didn't bother waiting. They'd catch up. Jackie and I began running together, and were having such a grand old time that we didn't notice something was wrong until the lead guys passed us. "Are you guys lapping us?" I moaned. No, they weren't. Hey! How were we back into the main aid station. I know time flies when running, but we must've run 2-3 miles, I knew, and the course was supposed to be 5. We tried to figure out where we went wrong and couldn't.


So Jackie and I fueled up and went out to re-do that last loop - and made it right the next time. Whew!


We ran another 2 loops, with less confusion. We were a lot more careful, as we had previously been lost, and as the race went on, the flour wore off and it was difficult to find your way.

But we had a blast. I got a nice easy training run in, didn't feel anything negative (other than tired at the end), hung out with superawesome Jackie, ate my homemade Ghiradelli chocolate chip walnut cookies during and after running, rode with Ray and Erin, hung out with lots of my other rad ultra friends...overall, a very good day.