The Freedom to Walk Down the Street

The Countdown to Burning Man...!

Three weeks from now, I'll be running around California like an idiot. I'm flying into my beloved San Francisco, where I'll pick up a rental minivan, then head down with Rachelle to Santa Cruz, where her mom lives. We'll grocery shop, stop by a hardware store, and begin to prep. Meal planning for a week. Figuring out the monkey hut. Packing the car. Last minute insanity. Liquor stores.

Then - on Friday, the drive to Black Rock City. We'll stop at Sparks en route to pick up my bike from storage, fill up our water bottles in Reno, and get to the playa! Burning Man! 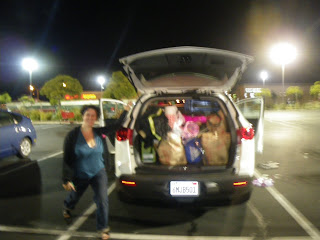 We're getting there early - yep, three whole days early - to plan for the Burning Man Ultramarathon. I'll run the approximate course with my GPS watch, figure out the loops and laps and then mark it all on a giant map of Black Rock City we'll have in front of our camp. I also have to have a meeting about the race too - there's been a lot of planning going into the 2nd annual Black Rock City 50k, but it's going to be amazing!

It's a lot. And if it's not enough. My job is in INSANE mode. I'm working at least an extra hour or two at night, and feeling a little insane. But you know what? In another three weeks, none of this will matter. 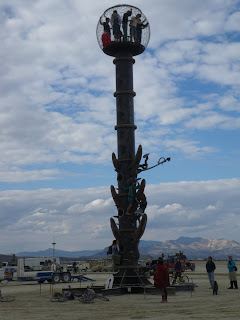 This weekend, due to a busy social life, lack of motivation, and other contributing factors, I did three shorter runs each day instead of one longer run.

Saturday, I had only so much time after picking up my sewing machine from the repair place, so I ran a short, hard three miles in my Vibram. I felt great. Then I headed to the beach. After swimming and eating a bunch of cherries, I ran about four or five miles on the beach, close to the hardest part of the sand. It was hot, and splashing alongside the water felt incredible. After downing a bottle of water, I swam some more. Then, after a margarita, I headed out for another short run - my boyfriend was making dinner, so I didn't have much time. Another 5 miles in my Vibrams. I really am loving training in them lately, but the longer runs can be difficult.

Sunday I intended to do 40 miles in NJ, but after some complications, I didn't. Instead, I ran about 7 miles in my Vibrams. I headed back to the beach (my addiction) and did another 7 miles on the beach towards Point Lookout. I felt really hot and after, started to feel woozy despite drinking a bottle of water on the run. A post-run smoothie helped. Then, after returning home, I changed out of bikini, back into running gear and did a few random things. Then Wayne and I headed out for a lovely night run. He learned you shouldn't bite too hard into your mouthpiece of your hydration hose, and after I was rained on for a few minutes by his hydration hose, we ran to my house and he borrowed a 2-bottle waistpack. Then we headed over the Queensboro Bridge, down 1st Avenue, then crosstown through the twenties, then down South until Chinatown for so, then back up and over, the Williamsburg Bridge, and we ended eventually at Kellogg's Diner, where we had milkshakes and grilled cheese and omelettes, and felt happy and a little tired and despite being soaked and a little sore, we were thrilled with what we accomplished, and of course, with the fun we had.
Posted by cherie at 3:57 PM No comments:

Cherie's Running Secrets: How to Navigate a Crowded Sidewalk

You're tired. There's some idiot in front of you, weaving and swaying, who won't move. Here's a few things to do:

But I found the best way - when people are running towards you, just open your arms as if you are going to give them a giant sweaty hug. They will part then for you.
Posted by cherie at 2:35 PM No comments:

I used to be a huge fan of sun teas. Nearly every day for a few years, I'd place a mason jar full of water and tea bags on my fire escape for the day. I'd bring the jar in at the end of the day, never finding that they were brewed too strong (sun teas tend to not get bitter like regular tea) and would keep them in the fridge after, pouring on ice whenever the desire to sip struck me.

However, after I discovered sun teas can harbor harmful bacteria, I stopped brewing it. This summer, I've been craving iced tea (way too hot for tea) and really missed iced tea. I've been brewing tea super strong, pouring it over ice, adding a little sugar or honey and milk, and sipping it that way. 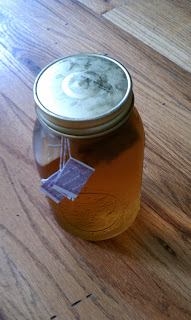 The Kitchn, one of my favourite blogs, posted on how to cold brew tea - and I must say, it's coming out delicious. The tea is of a mellow flavour, but really lovely. It's easy - just add some tea bags, cold water, put in the fridge overnight, and the next day - lovely cool delicious tea!
Posted by cherie at 11:35 AM No comments:

I'm No Delicate Flower...But I Do Suffer

My entire life, I've had problems with my period. I've missed countless days of work, been on bedrest multiple times, lots of medication, confusing doctor's appointments, had surgery due to some of my crazy problems last year that put me out of work for three weeks...pain, heavy bleeding, and just feeling depressed because of these two things.

Two recent articles, "How Menstruation Affects Your Running" and "Athletic Performance and the Monthly Cycle" examine the role in which running and athletic endeavors are affected by a woman's period. Their conclusion is not really. Which I guess maybe they studied men in these studies? I don't know a woman who hasn't felt depressed, uncomfortable, in pain, inconvenienced by her period. I remember losing fifteen minutes at an ultra, Virgil Crest 50 Miler, due to problems with my period. It sucks. I feel miserable and depressed. And I'll continue to do so, I suppose.
Posted by cherie at 11:25 AM No comments: