Email ThisBlogThis!Share to TwitterShare to FacebookShare to Pinterest
Labels: quotes 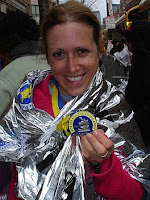 it's funny how boston is the standard of marathons. when you say, "boston" to another runner, they know you mean the boston marathon. even non-runners are impressed; while my boss came out and cheered me on at the new york city marathon (with a sign and everything!), she was so proud of my personal best time at boston ("look...look how many people you beat! you came in the 6,000s out of over 25,000 runners!") she started meetings by announcing my success. everyone knows it's THE marathon...

i almost didn't do it. i qualified in the nyc marathon; i was aiming for a personal best in nyc and i got one (3:32) but then crista was doing boston...and i had to do it. crista ended up NOT doing boston, but i had already paid. "there's no refund! i have to run it."

i ran a 50k two weeks before boston, and was really nervous. i had been running longer, slower, and doing less speed overall. i didn't have super high expectations, but wanted to PR, have a good time, and run strong.

i arrived in boston full of energy. i bought two boxes of Gu at the expo (strawberry banana, yum!) and realized after the expo that i didn't have my endurolytes. these help balance my electrolyte deficincies, which my doctor and i discovered i am prone to. i hoped i would run well.

the morning started off good. i got nearly eight hours of sleep, and met a super nice guy on my bus ride. we chatted and were super runner nerds ("oooh, kara goucher!") and it helped keep me calm. i headed into my corral and chatted with a fellow new yorker, shivering. it was COLD!

after the race started, my first mile was actually kind of slow. i picked it up, cursing that i was in the last corral of the first wave. this meant i had to fight my way forward...and fight i did. but i enjoyed myself. i smiled, i waved, i ran strong, i watched my watch...i was on target for 3:22, 3:23.

of course i started feeling nausea (i'm blaming the lack of endurolytes, though it also could've been the speed i'm not used to), which slowed me down the last few miles. i refused to give in. i ate pretzels. i ate oranges, lots of them. i ate watermelon (oh. my. god. i am going to have watermelon at my 50miler next week - it was that incredible!). i tried to force down gus. i got kisses from wellsley girls. i felt great, strong, happy, alive.

coming into boston i ran into a strong headwind but kept pushing. i was disappointed my time wasn't as fast as i had hoped, but i was still PR'ing. at the finish, i didn't pass out (that's saying something for me) and was rewarded with an amazing hot cocoa but a good friend. that was probably the best hot cocoa i ever had in my life. it was SO good. i asked for more whipped cream after i ate it all, and the guy gave me a ton. fantastic!

this race was amazing because i felt good, strong, happy, and i ran fast! 3:28!

and you know what? i qualified for boston at this race. i just might have to do it again next year! 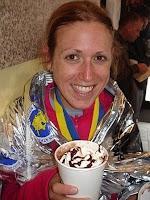 even sicker, i think i'm addicted to ultramarathons...

Are you addicted to running marathons?

Do your thoughts switch to the next scheduled race immediately after finishing a marathon?

Are you signed up for more than one race right now?

Do you know specifics about many of the marathons? Dates, courses, years run, etc.?

Do you know the story of how the marathon got started? Also why the course is 26.2 miles?

Do you read books on marathons like Marathon and Beyond?

Is www.marathonguide.com book marked on your computer? Do you look at the race schedule more than once a week?

Do you start to feel down when you haven't run a marathon in a while?

Are your closets and dressers filled with marathon t-shirts?

Do you have so many marathon medals that you've run out of room on the hook they hang from?

When asked about your racing from none running people, do you find yourself talking with great passion to the point that the person that asked the question regrets ever asking?

Have you run a marathon as a training run? Or just to pace a friend?

When asked by loved ones what your plans are for the weekend, you feel guilty telling them your running another marathon so you tell them "it's only a half this weekend"?

Do you plan all your vacations around a marathon race?

Well if you answered yes to any of these questions, you just may be a Marathon Maniac!!!

Posted by cherie at 9:52 PM No comments:

Email ThisBlogThis!Share to TwitterShare to FacebookShare to Pinterest
Labels: marathoning

aren't we so fun?

Posted by cherie at 9:50 AM No comments:

what sustains me:
i haven't written in too long, so i really should do that. but keep true to what sustains you instead of the things that don't matter.
Posted by cherie at 5:41 PM No comments:

lately, i've really been evaluating my life and seeing what is important. my grandma has recurrent melanoma; it's an extremely aggressive form of cancer. it came back again in her leg, and so there's been lots of talk abt no chemo, abt surgery, abt radiation, abt what-to-do. my gram is getting surgery, then radiation, and it's a scary, sad, hard process.

last week, after much thought and decision, t and i drove down to florida. (or rather, he drove all but one hour and i sat in the passenger seat, babbling and knitting and dozing.) it was great seeing my grandparents, but i think the worst thing, was the talk of "what-would-happen-to-papa [my grandpa]-should-something-happen-to-gram"? i realized that quite possibly, not only would i lose one grandparent in a short period of time, but two. gram makes sure papa eats, takes care of himself, doesn't drink too much, and she gives him love and life.

shortly after, i curled into the fetal position as t drove. "you okay?" he asked, and i replied quite honestly, "no." we drove in silence until shortly after, racking hysterical sobs overtook my body. i couldn't control it and he pulled over when he could and held me as i cried.

a coworker called me the next day, freaking out abt a petty deadline. i had no sympathy. how can i? my grandmother is sick, this is life or death. it's so hard to care about things like deadlines and formatting on a document and when someone says "i need this urgently" i know they don't. you need oxygen, food, water, and not cancer to live, not some stupid research.

this situation has forced me to think a lot abt my life, abt how i am not living like i want to live...and i'm starting to make changes. small ones, but i need to write more, live more, spend more time with my family and less time with petty bs.
Posted by cherie at 3:53 PM 2 comments:

how can i not be super excited to go after seeing this?
Posted by cherie at 4:05 PM No comments:

i can't wait until august to truly be myself

Posted by cherie at 3:39 PM No comments:

This is getting me too excited; this will be my first 100 miler this July!
Posted by cherie at 1:20 PM 2 comments:

i ran sunday's forest park 50k in forest park, queens. lured by the fact that a race was a mere 15 min drive away (thanks, t!) or even a subway ride, i had to do it!

the course was 2.6 miles, which we did 13 times. the organizers were all super friendly and great, and they had a pretty nice aid station (potatoes, cookies, chips, pretzels, soda, gatorade, water, etc.). i mostly ate my own food (2 gels, gummybears, a mini-snickers bar, pretzels), but ate potatoes dipped in salt and drank gatorade. yum!

the field was pretty small - i think they said there were 14 runners. there was only one other woman, and she dropped out after the 6th lap. whenever i passed, the race directors would shout, "the leading woman!" i would say, "but i'm the only woman!"

i didn't go all out -- i have boston in two weeks, and was using this as a training run. there were some pretty steep hills -- hills that you walk in an ultra. i ran until a certain point (which i kept the same each lap -- "just make it to that tree, cherie," i'd tell myself) and then walked. and then i started running at another certain point.

the hills were great practice for vermont -- one of the race directors told me he trained for vermont on these trails, walking up and running down one of the hills. i definitely plan on doing that.

when i finished, i got a trophy that said WINNER which pleased me -- probably the only time that will happen in an ultra. 5:43:03 -- my personal best for a 50k. after, i ate lots of veggies and went to the beach with t. it was a really nice day! t asked me, "are you happy?" and i said, "of course! i ran a 50k on great trails, and now i'm on the beach with you. what could be better?"