Join me in practicing....

Weekday mornings at 7am at Makara
Good morning yoga!
(The next two weeks, it will be every morning; after that, Mondays, Tuesdays, and Thursday mornings. Subbing on occasion.)
Weekday morning classes begin with an intention and theme, gentle opening (Hey, it's 7am!), an open-level vinyasa flow, and savasana.

Every Tuesday at 7:30pm at CrossFit Bridge and Tunnel
Yoga for Athletes
A gentler yoga class, we work to release areas especially tight for CrossFitters (and anyone): hamstrings, hips, and shoulders. We have lots of warm-up, lots of stretching, focus on releasing tight muscles and lengthening muscles.
Only $10 drop-in.

Yoga for Runners: An NBR event
July 6th at 8:30pm
Especially crafted for the runners of NBR, this focuses on areas runners need to release, open, and relax.
Free.


There will be future donation-based yoga classes in McCarren Park on weekday mornings. Stay tuned.
Posted by cherie at 2:06 PM No comments:

Email ThisBlogThis!Share to TwitterShare to FacebookShare to Pinterest
Labels: yoga 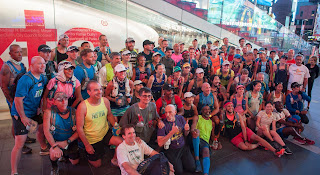 TGNY is a must for any NYC-based ultrarunner. Whether you run, pace, volunteer, cheer, it's an amazing experience to be part of.

American 48-hour record holder Phil McCarthy puts on this glorious race. TGNY 100 miler starts and finishes in Times Square; the 100k version starts in Times Square and runs the exact course until Forest Park, Queens, where it finishes. And it's so much fun.

The reason it's so much fun is that it's an opportunity to see NYC in a very, very different way. I had no idea that there were so many parks in NYC until I ran this race. There are tons of amazing parks. You run from one to the other. Sure, there are some sucky sections, but the awesome sections more than make up for it.

We start at 5am in Times Square...and then run north into Central Park! 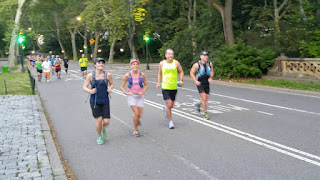 And then we run alongside Morningside Heights Park, and then eventually ending up at the river. Wait, I can't detail everything. There's just too much. Here's a map, and I'll give you the highlights:

It's funny - I ended up running pretty much the whole thing solo. I was planning on running with Ray, but he ended up having stomach issues and we were far apart pretty early on. Being alone meant I spent more time on the directions - there are turn by turn direction sheets, plus for the most part, there are arrows spray painted on the sidewalk (but not always), so it made for challenging. I pulled out my phone twice to verify that I was going in the right direction.

It felt good to get to Orchard Beach. I knew I was around the marathon mark, so that made me feel good, plus, the out and back allows you to see people.

I ran alone, but I was never bored. I looked for other runners, and rarely saw any. I was at one of those awkward "it's just me out here" moments. I found peace within myself.

There was the new entrance to Randall's Island from the Bronx, which was more like a road than a bridge - and it was really nice. Way better than in the past. On Randall's Island, my ankle hurt a bit. I decided to walk for 10 seconds, and OF COURSE I have to see a friend then. It was Matt, who was pacing Stephanie. He was so full of cheer in the most amazing way, and I tried to cheer up on behalf of him. So then I began running.

And then I got on the Triboro Bridge to Queens. This is the stuff nightmares are made of. I began trying to calm myself down, but of course was panicking like crazy.

And then - my yoga teacher Amanda was proud - I began chanting to Ganesh. I chanting repeatedly, and it helped me get over the bridge.

Post bridge, I ran with a group for the next five miles. They had their friends, and were uber cheerful. But then at the next aid station, they were dwadling, and I took off. I figured they'd catch me soon because the pain was starting to kick in; they didn't.

I began taking more walking breaks. The pain was so intense that I found myself audibly moaning. I was in a suffer-fest.

I ran. I walked. I drank water. I was thirsty. I was hot. I was getting sunburned. I was out of shape. Why was I doing this to myself? Where was the fun? Where was everyone else?

At the last aid station, a runner finally caught up with me. A French guy, "Sylvain, like Pennsylvania." I ended up running with him until the end. He pushed me, we chatted, it was so nice.

The last bit, we took off. And then - where was he? He wasn't near me...I ended up finishing almost a minute ahead of him, sure he would be crossing the line with me.

And then I sat down, exhausted. I drank a bunch of water, stepped on and broke my sunglasses, and took off my shoes. New blisters. Lovely. Not my best, not my worst. 12:54.

A shower, some food, some water, more food...

And I was pretty good the next day.

Ultrarunning, thank you for having me back. I'm so glad to be here again! 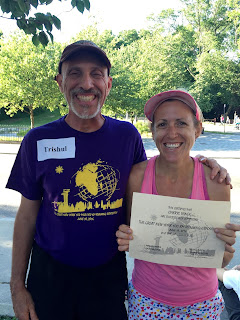 Posted by cherie at 8:39 PM No comments:

Routines can be very comforting. They also make life a bit easier. Before I left for India, I thought to myself, "Am I really giving up this wonderful routine?" It really wasn't wonderful, but it was managed, and it was my life, and I loved it. I loved getting up at 5 or 5:30 to run and strength train and practice yoga, work from home or bike commute, have lovely cocktails with my friends and wonderful dinner with my partner, read fascinating books, freelance write in the evenings, carry out the logistics for putting on an ultramarathon, help manage a Burning Man theme camp...

But it wasn't enough. I gave it up to find something deeper within myself.

Still, leaving the routine scared me. And I wondered if it was the right thing.

It was very much so the right thing.

Going to India was no routine. It was a bit scary, and at the urging of Jules, I created my own routine. Start my day with yoga or running; I added mantra and meditation too on occasion. Fill my time with writing, yoga, exploring, self-reflection.

Since I've been back, I thought it would be easy peasy to have a routine, and I'd have oodles of time. I imagined my mornings spent running, strength training, practicing yoga, hours of meditation...writing to fill in the blanks...working on job hunting in between...maybe even meeting Wayne for lunch frequently?

I've filled my life up way more than I can imagine. Cleaning my house, cooking excellent food, and catching up with friends and family take way more time than I could have imagined...not to mentioned looking for work (and in several different fields, no less!), plus keeping up with my freelancing. My yoga teaching means that I can't skimp on a practice for myself: I need to continue to develop my own personal yoga practice, so I spend a lot of time doing that. I read yoga books. I have been doing continuing education: Restorative Yoga Certification; RRCA coaching course (still working on that bear of a take-home test! Way more time than I imagined...); CPR/AED/First Aid certification.

So I have lots going on, and I love it. I have no routine, which feels a bit weird, and at times, if I weren't so focused, I'd be unable to actually complete anything at all.

But it's the summer solstice. I started my day at 515a.m. with 108 sun salutations...and the day has been fulfilling, productive. Good food, good writing, and lovely weather. So I have no routine - that's okay. I have so many other rewarding things in my life to fulfill me.
Posted by cherie at 1:19 PM 1 comment: