Burning from Dylan Jones on Vimeo.
Posted by cherie at 10:11 PM No comments:

Still won't forget it. That bus ride from Mindo to Quito. The blurring scenery. The last bus of the night. Knowing I was leaving Ecuador. Knowing that I was going home to my weak grandmother. Knowing that I'd likely never return.

Talked to an old man in Spanish. He told me about the restaurant he had opened. He used to live in Quito, but "no hay amor."

Dreamed out the window. Missed home. Missed my cats. Missed normalcy, but knew there's no such thing.

Watched a couple flirt, laugh. Looked at my reflection in the bus window. We drove on.

Highways at night to Quito...
Posted by cherie at 10:01 PM No comments:

Baby I was BORN TO RUN ULTRAMARATHON: 60 Mile Race Report

Born to Run was a lot of fun. It was a weekend of camping, running, drinking, sharing, laughing, making new friends, hanging out, being dirty, mariachi, and fun.

Oh, and my Morton's Neuroma behaved. So it was a very good weekend. 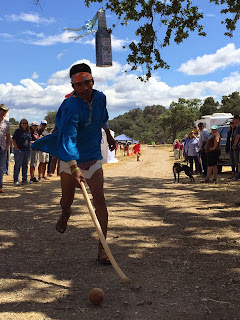 My friends have described Born to Run "kind of like Burning Man" but I always like to point out there already is an ultramarathon there, HELLO. But what it does remind me of is those early entry days of Burning Man...when no one is there...you're setting your stuff up, getting ready for stuff, hanging out, drinking, eating, talking, making new friends....it was fun. I made a ton of new friends, had great conversations, shared food and drink, chatted, laughed, enjoyed the day.

The day before there was both an archery mile (shoot three times, do a penalty mini lap for anything you miss, run 400 meters, repeat three more times....) and a beer mile. There were live bands, a bola race (the traditional Tarahumara ball game), a fire at night, sharing of food, buying food, shopping at booths, fun.

Race day was fun. Luis wakes everyone up with a shot guy and super load mariachi music. It was a pretty great way to wake up. I usually only take 20-30 minutes to get ready, so I had a long time to have multiple port-a-potty visits, stretched, eat, nap....

Luis basically told us all to smash our Garmins. He doesn't want another North Face type race with newbies knocking over each other to race race race - he wants to create community, something that I'm really into w ultras. He was so irreverent I couldn't help but love him - but I could see how certain personality types would loathe him.

We took off. I began chatting with everyone around me, feeling pretty confident I was going too fast. OH WELL. I'm always a fan of bad ideas, fast starts, and kissing without questioning. (Hey, that got me into a 4.5 year relationship that turned out to be awesome!)

The course is made up of two 10 mile loops - the pink loop which is okay, and the yellow loop, which sucks and I kind of hate, but it does have gorgeous views, so okay, I'll run it again. There are lots of rolling hills, a few steeper hills, a horrendous downhill that I could not do the last time without death-gripping onto Paul's arm.....

It's not a technical course, and I ended up running in road shoes due to a shoe malfunction. I got pretty dirty, I hated the world, and I felt like I was waaaay out of shape at the finish. (My training has jumped way up since then!)

My stomach was good - I tried the low fodmap diet the day before, and drank what Kelsey called "Smooth Operator" tea, and I only ate Hammer gels and Hammer solids. (Seriously, a food that is called a Solid? How can that be good? But really, they're not bad at all!!!) 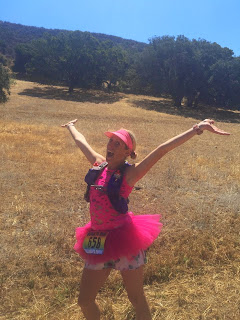 I had fun. It was gorgeous, the crowds were great, it was a party everywhere, even when the last lap totally sucked. I wish it had been a 50 miler. But when it was done, and I had Akabill's amulet around my neck, a burrito in my belly, and a cider in my hand....I had a huge smile on my face and was ecstatic that I had been part of such a great race, such a wonderful community, and such an amazing place on this earth.

I had wanted to drop down to the 30 miler, mainly to hang out with friends. Doing the 60 was something I kind of regret. When I mentioned my desire to Paul, he said, "No, please, you have to run the 60 with me!" Not knowing my pace or anything, but feeling bad because I pretty much talked him into running, I decided, yes, I'd run. And we ended up running together, having fun, singing The Sound of Music (though Paul really needs to work on the lyrics to "Doe a Deer")....so it worked out fine. But we missed the talent show, the wrestling, a lot of dancing, and when I finished, I was so cold and shot that I couldn't really enjoy the after party that much. It's a party. Go to run some, yes, but go to enjoy the awesome environment more.


you can see how lost paul and i were....how hardcore we were racing.... 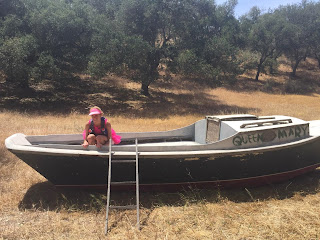 all photos by paul swanson