Do not what you want, and then you may do what you like

"Do not what you want, and then you may do what you like."--Sadasiva This quote has truly inspired me for several years now. It means so much things to me, but primarily, it teaches me patience.

A few years back, I decided to quit my job and travel. My job was making me miserable, and after an email to my friend Jessica, she wrote me, "Do not what you want, and then you may do what you like." I sat with this quote for a while, and pondered what it meant. It taught me that ultimately I'd be able to do what I liked, what my ultimate goal was, if I sat and was patient and not running off to follow my impulses every other second.

This is a HUGE period of change for me right now. There's a lot of pain but I am trying to look at the possibility of absolutely anything happening. As a slogan for the Boston Marathon was two years ago, "Impossible is nothing." I am trying to embrace that, but with patience. I am living life with my entire heart, but letting my head make the major decisions as well.

Struggle is Beautiful; It is beautiful to struggle

"The most beautiful people we have known are those who have known defeat, known suffering,

known struggle, known loss, and have found their way out of the depths. These persons have an appreciation, a sensitivity, and an understanding of life that fills them with compassion, gentleness, and a deep loving concern. Beautiful people do not just happen."
--- Elisabeth Kubler-Ross

Posted by cherie at 4:01 PM No comments:

Learn to run when feeling the pain; then, push harder.
--William Sigei

I've never regretted going for a run, but I have regretted skipping one.
--Chris Beck
Posted by cherie at 4:00 PM No comments:

Sage Advice from a Friend

Sometimes you have to close out some of the old so you can make room for some new. Not fun, but necessary.
Posted by cherie at 9:48 PM No comments:

I myself have never been able to find out precisely what feminism is. I only know that people call me a feminist whenever I express sentiments that differentiate me from a doormat. 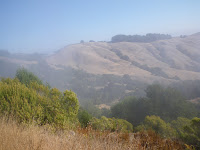 I initially read about the Dick Collins Firetrails 50 Miler in Trail Runner magazine, and it sounded awesome -- good footing, good views, good foods, good people. I fantasized about running it, but didn't register until just a month before the race. I'm so glad I did - it was my favorite ultra ever, probably even my favorite race.

I went to bed early the night before (East Coast time helped me out!) and slept 8 hours, waking up periodically to make sure I hadn't overslept. I arrived at the start, chatted with some really friendly runners, stretched, shivered. The race was fairly chilly at the start -- I started the run with just a tank top and running skirt on, and throwaway gloves (which I wore until mile 20). 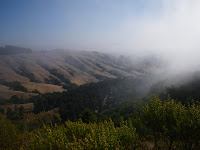 With a view like this, how could I not be inspired to run fast?

We started in the dark at 6:30, but as most of it was on pavement in the very beginning, headlamps weren't really necessary. There were some hills, but I pushed on, excited to finally be running a race I heard about months ago and constantly thought about -- especially one that was run by the legendary Ann Trason! Wooohooo! (I don't crush on celebrities, but on ultrarunners like Ann Trason.) I ran the first twenty or so miles with a really lovely woman named Laura; we discussed our desires (and my fears!) to get into the Western States 100 Miler lottery. I lost her when I stopped to pee, and I was happy to see that she finished quite strong (and made the qualifying time for Western States lottery). 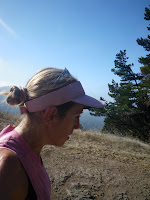 The course was hilly -- lots of ups and downs -- and is an out and back. This means that while mile 20-25 you are running downhill, you hate it because you know on the way back you will be walking and suffering. Most of the hills weren't the heavy-breathing-painful-walking-type-hills, but the kind where you could drink some water while power walking or even do a slow run up them. There weren't too many technical portions (yay, because I suck at technical running), but there were some really lovely views, including a bunch of switchback portions which made it difficult to sometimes see how far ahead you had to go. 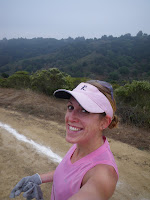 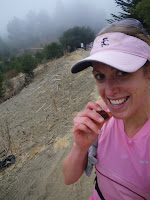 eating a brownie while running=heaven!
I met so many amazing people -- super-friendly runners, aid station volunteers. I was wearing all pink - pink visor, pink tank, pink running skirt, pink gaiters -- so whenever I arrived in an aid station, I got the "Pink lady!" or "Pink!" shouts. It felt pretty good.

I was SO happy to finish. I was pushing as hard as I could, running the hills, and when I saw the finish line, I almost started crying. I ran with my hands high up in the air, pumping them with a massive smile!

Post-race, finishers got a wine glass, jacket, t-shirt, tote bag, and the most amazing post-race BBQ (veggie burgers, grilled meat (if you're into that), homemade soups, pasta salads, corn, amazing dessert, yum) -- I chatted with a newbie and his family, and had the biggest smile!

Strangely enough, that night I went to a party, had swollen feet but was mostly fine; the next day, the aches were so minimal I barely noticed; I went to San Francisco Burning Man Decompression and danced and walked around for nearly twelve hours. Only my big toenail complained (and looks like we're getting rid of that toenail anyway!), but I felt remarkably recovered from having run a hilly 50 miler! 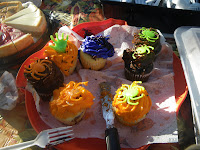 I'm so excited - I'm running another 50 miler. 100s are immense, monstrous, require insane amounts of training, and once you do them, 50s seem quick, like cake. I pick my 50 milers based on the beauty of the course, the fun, the volunteers. I hear they serve homemade cookies at the Dick Collins 50, and there's amazing views - so you better believe I'm psyched to run 50 miles there!

As I'm counting down the minutes, I'm resting, cutting back on alcohol, increasing sleep, and getting psyched for some good times on the trails!
Posted by cherie at 8:25 PM 2 comments:

what i did today

Posted by cherie at 6:14 PM No comments:

Email ThisBlogThis!Share to TwitterShare to FacebookShare to Pinterest
Labels: video

I'd hate to advocate drugs, alcohol, or insanity to anyone, but they've always worked for me.

Posted by cherie at 6:08 PM No comments: