I feel like there are so many new things in my life, it almost seems as if I have moved someplace else. I've been on vacation from work for the past week, so I don't even have that constant to ground me. My partner of ten years, my best friend, my everything for so long, is moving out to fix his life - and although we did officially break up months ago, having him leave and lose his constant presence in my life is excruciatingly painful. I am sorting through things -- "This is yours, this is mine," replacing things (new pillow, new towels, new colander), bought a new laptop (How the hell do I buy a wireless router and how can I figure this all out?), am trying to figure out how to navigate my new life.

I think part of it is to think of life as a constant, ever-changing, ever-evolving experience. I cannot expect or plan things because the best-laid plans always crumble and fail. What can I hope for? I really don't know. I hope for happiness, for lots of running (and no or minimal injuries), for lots of traveling, and for lots of love.

I don't think NYC will be my permanent place - I see myself uprooting in a few years, maybe moving to the mecca of ultrarunning (CA) or traveling around for a few years or living in another country. I don't know what's ahead, but I know I should focus on my immediate happiness, and everything else will work itself out. Eventually.

Santacon is a day where thousands of people dress like Santa, and roam the streets of NYC, heading to bars, bowling alleys, parks, art studios, subways and more to share in holiday cheer -- candy canes, gift givings, and yes, lots of drinking. 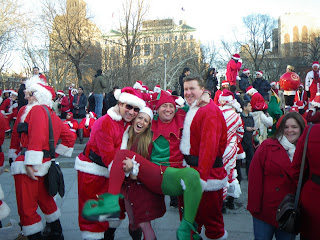 Holding up a bad elf in Washington Square Park 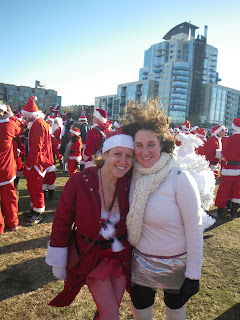 Me & Rachelle in the East River Park. Rachelle was a snowflake. 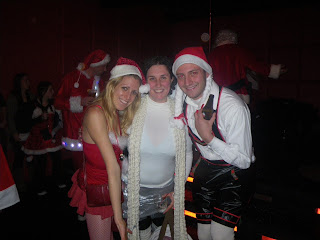 Me, Rachelle & Ricola Girl (People dress up like everything!) 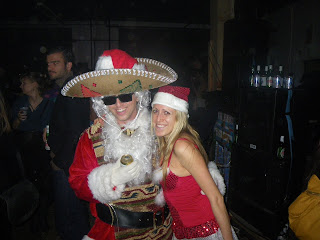 (Mexican Santa and me at The Danger party) 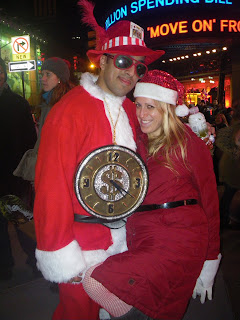 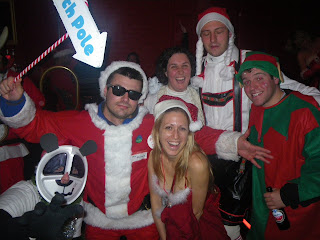 Which way to the North Pole? 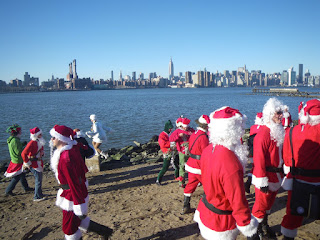 Santas in the East River Park 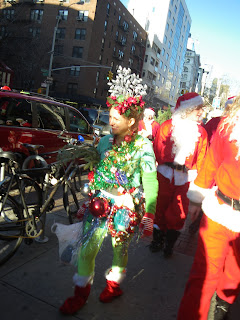 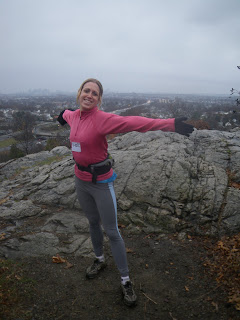 After being sick for two weeks (including a week of not running), I was ready to hit the trails. I signed up for the Fells 40 Miler just outside of Boston, and was psyched to have one final trail race in 2009.

The course was 8 mile loops, and despite a forecast of rain and snow and 30 degree temps, I was psyched to spend a day out on the trails.


I felt pretty slow the first loop. The terrain was fairly technical, with some big boulders that slowed me down, and it took a while to warm up. I was running alone when I ran into Nelson and Giselle, who were lost after arriving late. They were on the blue trail and they began running with me. Fun!

Back at the start, we fueled up, and Nelson and Giselle got the dogs. We ran the next lap with the dogs, which was fun. We changed directions that lap, and I liked that way -- easier.

Nelson and Giselle wanted to run in opposite directions, so Iliana and I ran together the easier way. It was fun, though it started raining a little. I decided to definitely do a fourth lap, while Iliana decided she'd nap.

When we got back to the start, the RD told me he didn't want me going out. "It'll be too dark." Damn, I didn't even think of a headlamp. I ended up borrowing a headlamp from someone. I began to get ready for my fourth lap.

"The thing is...I'm leaving at five. You can still go, still continue, but if anything happens. Bring your cell phone."

I was debating - should I stay or go? There would always be another race - but I hate stopping running, especially when I was having a blast. I decided I'd go. I swapped shirts for a drier shirt, put my mobile phone in my fuel belt, filled up my water bottle.

Getting lost in the dark...

I began to doubt myself. Should I go? Should I stay?

I dropped my headlamp and lost a battery. I was fumbling, trying to leave.

And my decision was made. The rocks were slick enough at the start, even more so with a little rain. But with ice...I am not stupid enough to risk breaking a leg.

I was okay with that decision. Sad, yes, but there will be plenty of ultras. I ate some pizza with Nelson and Iliana and I began the snowy drive back to NY.

There will be another race soon. There's always another race. There's the Phunt 50k and the Watchung 50k and the Dances with Dirt 50 Miler and Umstead...so I didn't get in Western States 100, but maybe there will be San Diego 100 Miler or Big Horn or just a lazy day on the beach....There will always be more races. I knew if something bad happened I would not have been able to get help easily, and there would not be people periodically passing me -- and I would regret the decision of taking an extra lap. Sometimes, the smart decision is the hard one to make.